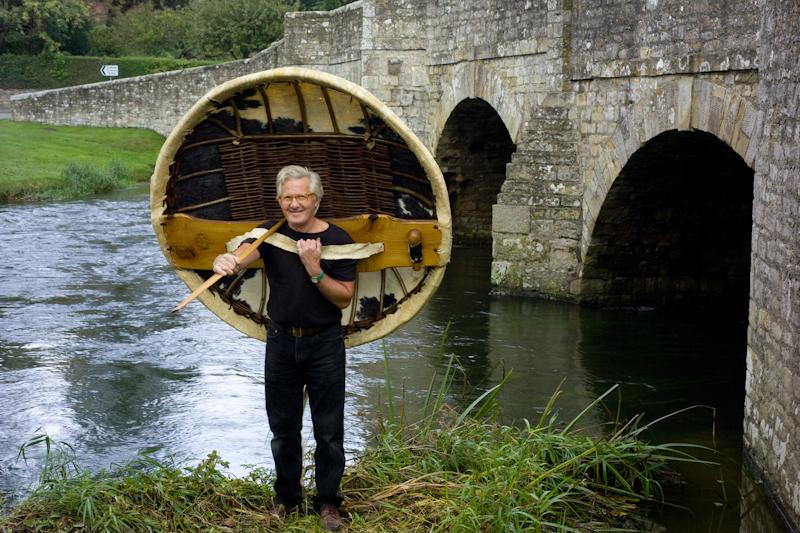 The Teme coracle is an interesting one - it is an example of coracles being resurrected in a place where there may have been coracle usage in the past, though this cannot be verified as there is no knowledge of this in living memory. The association of the coracle on the Teme has a lot to do with Leintwardine resident, and Society vice president Peter Faulkner. Peter Faulkner recounted to Sir Peter Badge as he was writing his book that he remembers his grandfather using a coracle - thought to be some Severn type - on the river at Ludlow. He also heard of a story of coracle usage at Leintwardine in the 1920s.

Peter Faulkner first built his Teme coracles in Leintwardine in the late 1980s, after visiting Ironbridge coraclemaker Eustace Rogers for tuition and guidance. Eustace at that time was building a hide covered Ironbridge coracle, using traditional methods and locally sourced materials. Peter was keen to build his own coracle so he could explore the length of the Teme, so took this newly found knowledge back to his village and built his first Teme coracle. Along with exploring the Teme by coracle, Peter has travelled along the Severn, Wye, Thames, Shannon and Spey rivers - the latter he wrote about in our 2012 Journal.

He uses locally coppiced hazel - which receives no treatment, such as cleaving - to form the frame of the vessel. The Teme has 5 longitudinal and 5 transverse laths. A tightly woven base is added for extra strength. A seat and seat post made from ash is added, and a single, whole, cow hide obtained from the village butcher is used as the vessel's skin. Note, the hair is not removed from the hide, and is placed facing in to the boat. Often, as can be seen in one photo below, the tail of the hide remains and is a signature feature of Peter's Teme coracle. The hide is cured in a mixture of salt petre and alum before being applied to the coracle. Horsehair bindings are used to secure the various components - no screws, nails or staples are used in this traditional construction method. The coracle is completed with a paddle, again made from ash. Lanolin is used to preserve and protect the outside of the coracle. Often, the seat and paddle has a unique marque carved or pyrographed on.

Peter soon gained a respectible living, as a maker of traditional coracles. He has run courses and made boats to order, both for members of the public and for use in film and television. In recent years, Peter has worked with the likes of James May and Richard Hammond on BBC factual programming. Peter also inaugurated coracle regattas at Leintwardine in the 1990s, which were always well attended and were quickly established as one of the highlights of the Society's calendar. These continued until the mid 2000s.

It's not surprising that, given Peter's tuition by Eustace Rogers, the Teme coracle is similar to the Ironbridge. The Teme coracle tends to be slightly larger, much more bowl-like, more rigid in construction and Peter uses horsehair bindings, as opposed to hide bindings used by Eustace on his hide covered coracle.

Peter also constructs Boyne currachs in a similarly traditional fashion. He is known for travelling in one of these from Northern Ireland to Iona in the late 1990s.

Some content provided from "Coracles of the World" by kind permission of Sir Peter Badge. Photography credits: Gloria Nicol for Landlove Magazine
Missing a credit? Error in our information? Let us know so we can update this