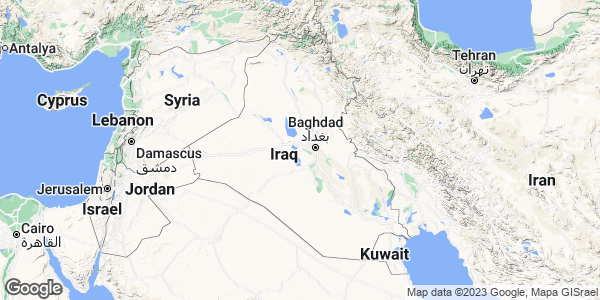 The coracle-like vessel used in Iraq is known as the quffa (pronounced guffa). There is plenty of evidence of regular use of the quffa until recent times.

The quffa has a similar shape to a number of other coracles, including the North America bull boat, Ironbridge coracle, Spey currach and one type of Tibetan coracle. Their main use has been transportation of people and goods - regularly used for transporting produce to market, people and livestock across rivers. The general shape of the craft is circular, almost flat bottomed, with side walls that bow outwards. This 'tumble home' feature makes them almost impossible to capsize, making them a very stable craft in comparison to other coracles, for example the Ironbridge.

Construction of the vessel is basketlike - indeed, you can consider the quffa as a basket without a lid. Ribs radiate from around the centre of the floor, with reeds - bundled, woven together and secured with palm fibre rope - making the walls of the vessel. Typically the quffa is built with two people - one working from the inside, threading the reeds outwards; the other person working from the outside, threading the reeds inward and securing them to the ribs with palm fibre rope. The quffa would have originally been waterproofed with animal hide; nowadays bitumen is used.

The size of the quffa varies - there is evidence of all sizes of vessel, from small - capable of carrying a couple of people - to very large, with the capacity of carrying several tons of cargo. Examples of uses for these larger quffas include carrying several horses and men, and carrying materials used for bridge construction in Baghdad. Hornell wrote average sizes for the quffa range from 4 and a half feet to 10 feet in diameter and 2 and a half to 4 feet in depth.

The generally accepted propulsion method for the quffa is paddles, sometimes multiple paddles/paddlers on the larger vessels - one person paddling over the 'bow' of the boat, pulling it forward, and another over the 'stern', pushing it forward.

Some content provided from "Coracles of the World" by kind permission of Sir Peter Badge. Photography credits: Sir Peter Badge
Missing a credit? Error in our information? Let us know so we can update this