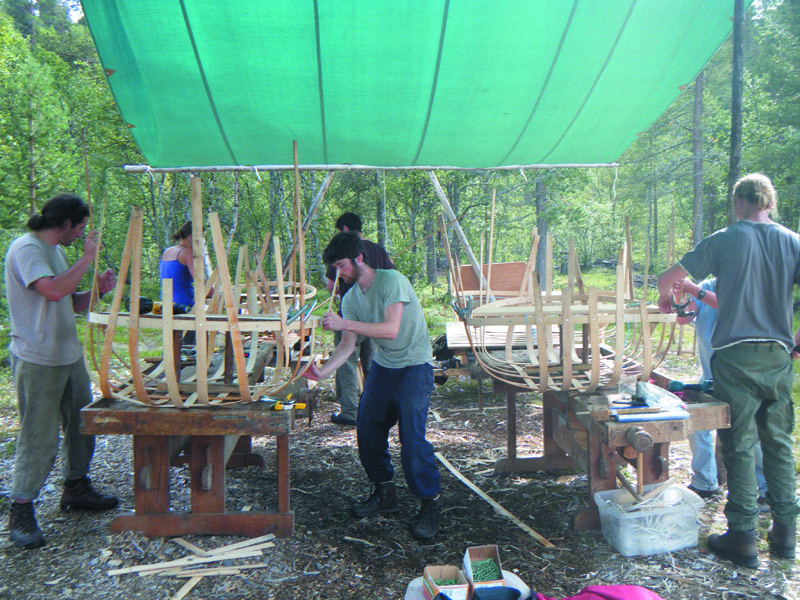 Coracles are well known at Shrewsbury, just upstream of nearby Ironbridge. Most people know of coracle usage at Shrewsbury through the infamous tales of Fred Davies, in the mid 20th century, recovering footballs from the river which lay behind the Shrewsbury Town Football Club. However coracles have been used at Shrewsbury for other purposes too, including net fishing, pole and line fishing, and poaching. The laying of night lines to catch eels - as at Ironbridge - was another use of the coracle at Shrewsbury. The Davies family used their coracles for pole and line fishing in the 1980s. This was possible because of free rights of passage on the Severn - as long as they were detached from the bank.

The design of the Shrewsbury coracle, in comparison to the nearby Ironbridge, is more square with a flatter base (the Ironbridge craft has a more bowl-like design). The laths on a Shrewsbury coracle have sharper curves - all of these features create a coracle that is rather box-like.

The Davies family is a well known coracle family spanning many generations, and today is the last remaining traditional coracle family in England. As previously mentioned, Fred was famous for retrieving footballs from the river on match days. He is also attributed to starting up coracle making courses at Bewdley Museum and Green Wood Trust (now Small Woods) - at the latter, these continue today. Other family members include Jack, who was respected as the most knowledgable coracleman in the family, and John who was deemed the most prolific coraclemaker of the family. John made many different types of coracles and examples of his handicraft can be seen at the National Coracle Centre in Cenarth. As mentioned above, Shrewsbury remains the only place in England with a traditional coracle family; hopefully this long history of tradition will continue with the youngest generation of the Davies family.

The Shrewsbury and Ironbridge coracles tend to be the staple of coracle making courses. Of course a lot of this has to do with Fred Davies' involvement with setting up courses at Green Wood Trust, but there is another good reason for this - as a vessel, they are simple craft for beginners to make and ideally suited for first time coraclers on the water.

Some content provided from "Coracles of the World" by kind permission of Sir Peter Badge. Photography credits: Dave Purvis
Missing a credit? Error in our information? Let us know so we can update this